I grew up in Daveyton, a township east of Johannesburg where the visibility of homosexuality would happen in private spaces away from violence that often preceded the homophobia I was accustomed to.

I learnt that there was a big LGBTIAQ+ community in the township and I always wondered what influenced or communicated to them that they were now gay, lesbian or trans*,since these labels were given to them by a society instead of them self-identifying.

Back home I was told that to be a girl means “softness, looking after a home and being subservient” but those who knew me considered me as ‘rough’ and yet, at the same time, nurturing. When I am home, I am expected to wear dresses and skirts, to have female friends and to marry a man and have children one day.

I found solace in a group of friends who showed me love regardless of how I identified as a teenager, I was and still am androgynous in many senses.

As a teenager, I realised that I was attracted to the same sex and that it was a taboo. I may have been perceived as more masculine but I knew I was not a boy. Alas, society made me feel like perhaps my breasts and vagina dictated whom I should be attracted to or with whom I should have sexual relations with.

The games we played as children often found me portraying the ‘Daddy’ role in my formative years. Looking back I now realise why and also how I remained single throughout my teenage years.

I knew the ‘L word’ was not for me. I was not only attracted to the same sex but I found the opposite sex equally attractive, although I just didn’t want to have sex with boys.

In my exploring my sexuality with friends, for some reason I was referred to as being ‘butch’ or ‘dyke’. I cringed at this with disgust. How could I cringe? I dated feminine woman as an adult, so these pseudo-masculine labels were okay for my friends to use because society thought it was ok to perpetuate heteronormative gender roles within the LGBTI community.

Labels that distinguish who is the “woman” and who is the “man” in relationships; one could either be a ‘dolphin’ or ‘shark’ , ‘femme’ or ‘butch’, ‘top’ or ‘bottom’. I couldn’t stand these dominant and submissive gender roles in my relationship.

I had friends who were called ‘aboMalume’ (the uncles), in Cape Town it was ‘TaPhilly’ (brother Philly) in reference to my seemingly masculine role in a same-sex relationship (I guessed). When I wore a skirt or anything feminine, it was received as if I was confusing my masculine representation within lesbian identity and that I should pick one, otherwise I would be considered bisexual. I no longer had to imagine why bisexual individuals in the LGBTIAQ+ community experienced discrimination.

It seemed to me that masculine performing lesbians birthed patriarchal gendered roles to be considered a real ‘butch’ to maintain the masculine façade needed in order to date the more feminine lesbian; the buzz word from a socially constructed language for gender identities from television series The L Word in Europe and Society on South African television.

The plight of homophobia towards lesbian women is that we remain in danger of being raped and tortured to conform to culturally conditioned concepts and beliefs accepted in heterosexual guise of gender roles.

A new safety mechanism emerged within the lesbian community to protect ourselves and our partners from the violence. Violence begot violence and in turn, more masculine representing lesbians emerged, they were kick-ass fighters, muscle strength and fearless aggression. Did the feminine woman ask or seek for this muscle? I digress.

Back to the ‘L word’, it constructed gender roles that I believe tipped the scale of gender inequality to a patriarchal oppression between the same sexes instead  of outlining lesbian woman as strong, independent, sexually confident women dating without demarcated roles of masculine and feminine in their relationships.

I overlooked ‘aboMalume’ bashing their girlfriends for not listening, not cleaning, talking too much or not cooking for ‘the boys’ during a chilling session. There was pride in taking care of the feminine lesbian in the relationship, because uyindoda (you are the man) in the relationship.

It can be said that masculine lesbians in my realm were perpetuating gender stereotypes accepted in heterosexual relationships. The dress-code of masculine lesbians was that of male clothing to distinguish themselves from feminine lesbians and it reminded me of babies dressed in pink or blue as gender markers.

For instance, it is easy to mistake a trans* man with a masculine representing lesbian, even non-binary individuals find this an issue in many cases. As a community we call this out and come up with pronouns, or advocate against such hurtful stereotypes and discrimination. Consequently, why is it that we are silent about our advocacy on gender-based violence within the LGBTI Community?

Perhaps, the thought of the very same ‘holier than thou’, ‘#menaretrash’ feminist advocators who are also against the abuse and violent treatment of women and children are really a part of the actual “trash” too?

When the #metoo movement started, I resonated with the expression of violence I had previously also experienced from lesbian woman, and so, I too joined the masses in enforcing “TheTotalshutdown” march.

I was inspired by a passage I read from an activist poster, it said, “Queer feminists rape too. We are not safe! #metoo. I March For Myself and Every Survivor of Abuse!”

It is then that I knew I was not alone, nor was I surprised when I heard about the infamous Queer Callout List. I believed them. I saw it happen and I turned a blind eye. I heard “ngizo si’khaba lesi’febe” when they get home, or after this poor girl would be slapped “Asambe” and then when Umalume leaves they are applauded for their manhood of ‘putting her in her place’, as the sentiment was echoed “uyinja”.

By the way I didn’t forget the friends that called every hour to check where she is and if she does not answer “the bitch is cheating” or being topped by someone. The minute she answers “where the fuck are you? Who are you with? When I get home you better be home! You must cook for me?” says the butch or shark in their tom-boy t-shirt and underwear.

This is not new or a fashionable phenomenon, we are a violent community to each other also. We also need to kill the silence and come out from the closet of shame from the violence perpetrated.

The list is endless, but the fact is masculinity within lesbians creates toxicity; these pseudo-men together with the trans* men, who emulate this toxic behaviour, puts them all in the same bracket when they say #menaretrash. 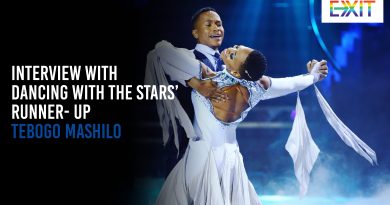 One thought on “Opinion: Toxic Masculinity in the L Word”